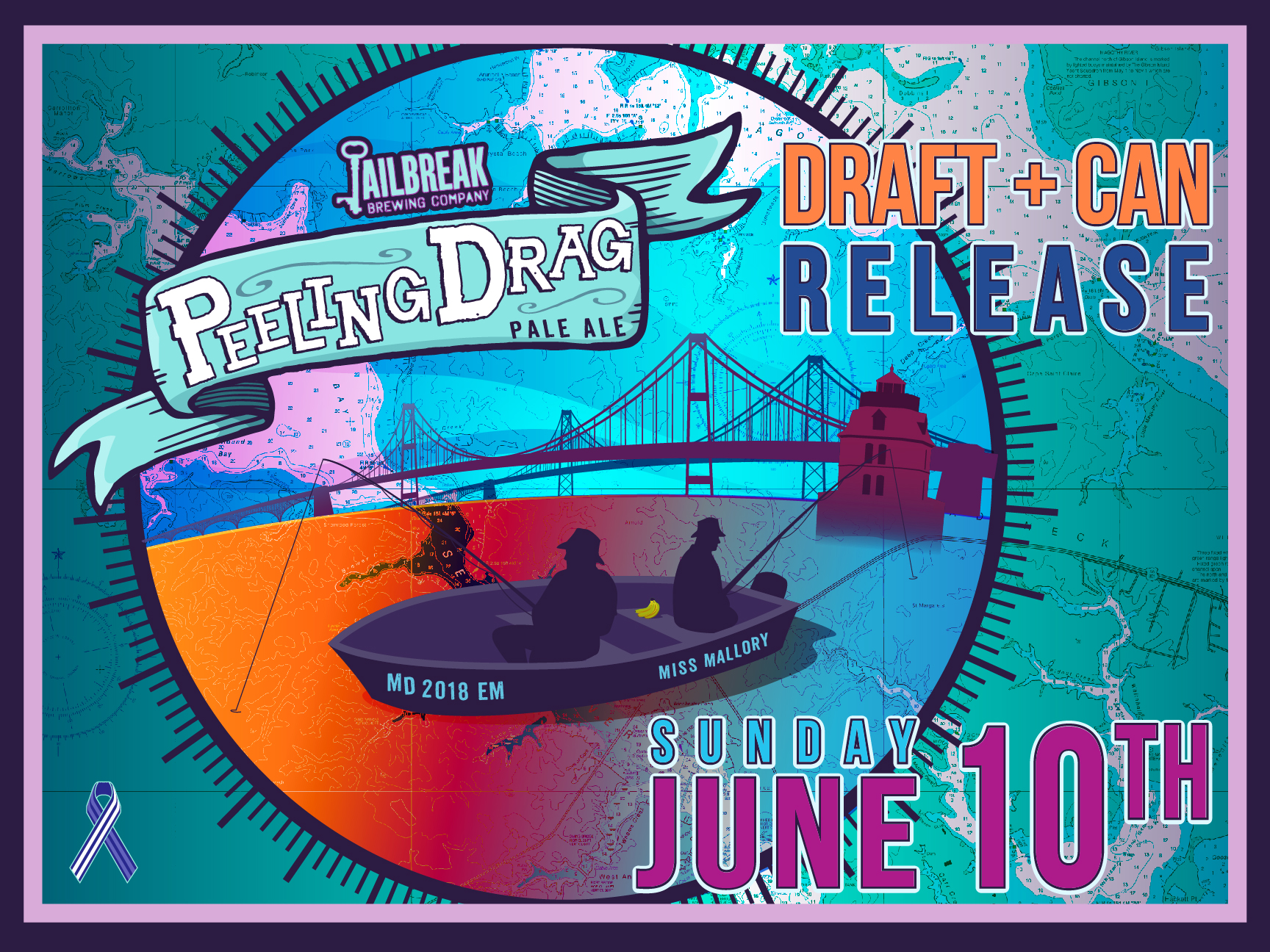 We can’t think of a better way to spend a summer’s day than being on the water with a good beer in hand. And we’ve got a brew that’s particularly perfect for those times: Peeling Drag Pale Ale, a crisp, refreshing brew to quench your thirst while fighting that drag-peeling keeper.

Brewed in collaboration with the guys behind Arnold’s Annual Mid-Magothy Invitational (more details on that below!), this limited edition ale will be hitting the Taproom, on draft and in cans, on Sunday, June 10th.

From 11 a.m. to 8 p.m., Peeling Drag pints will be $5. We’ll also be donating a portion of Peeling Drag packaged and draft purchases to The Packard Center, which funds and supports ALS research around the world. This organization is also the beneficiary of funds raised during the Mid-Magothy Invitational.

Two years ago, Jailbreak’s COO Kasey Turner and Brewmaster Ryan Harvey connected with Scott Glubke, a member of the Mid-Magothy Invitational Committee, when Glubke and his home-brewing friends visited Jailbreak for a happy hour. Following an invite from Glubke, Turner attended the Mid-Magothy Invitational where he extended an offer the brew-crew couldn’t refuse—brew a beer at Jailbreak on its pilot system, which we would keg and can for them to serve at the Invitational.

And so, Peeling Drag Pale Ale was born. This year, we stepped things up a notch, brewing a 20-barrel batch with Glubke and his brew-crew to serve, yet again, at the Invitational.

Established in 2014, the initial reason behind the Mid-Magothy Invitational was simple: create a community fishing competition to be enjoyed by friends. Soon after a successful inaugural event, Eddie McGowan—a good friend of many of the committee’s members—was diagnosed with Amyotrophic Lateral Sclerosis (ALS), more commonly known as Lou Gehrig’s disease. The committee decided to turn the contest into a way to honor him. Unfortunately, Eddie passed away earlier this year, yet the Mid-Magothy Invitational continues to fight for him by raising money towards ALS research.

“He had a huge zest for life; he would do anything for a laugh,” says Glubke.

Official tasting notes: Peeling Drag is a dangerously drinkable pale ale designed for the maximization of flavor! Robust hopping with both Cascade and Citra provide a firm citrus foundation, while measured whirlpool additions of coriander coupled with lemon and orange peels only serve to accentuate and amplify the pre-established hoppy deliciousness. This beer will no doubt quench your thirst while fighting that drag-peeling keeper.