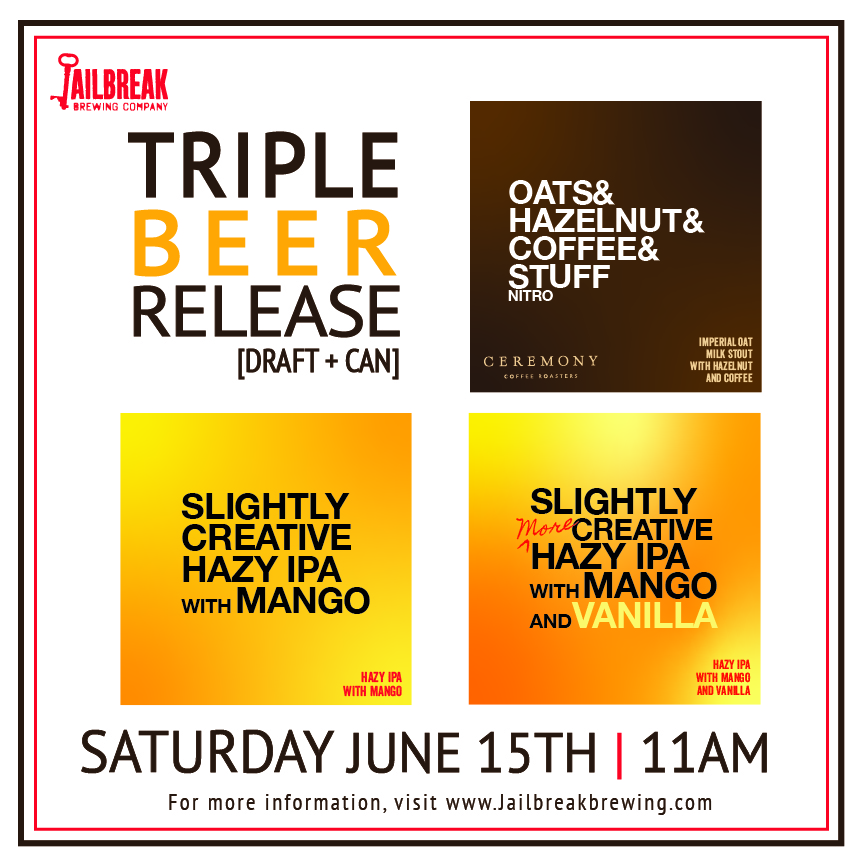 We’re back at it with our “Creative Break” series bringing two Hazy IPAs and an Imperial Oat Milk Stout on Nitro to the Taproom on Saturday, June 15th. And, just in time for Father’s Day, we’ll be featuring a South Moon Under pop-up shop from 3 to 7 p.m. in the Taproom!

Our SMU friends will be bringing along some perfect-for-gifting goodies—from socks and hats to bottle openers and soap—taking any stress out of the usual “what to get Dad?” scenario. We’ve also partnered up with this Ocean City-born retailer to create a tee you’ll want to rock all summer long. They go on sale Saturday in the Taproom, but you can also pick one up at the following Maryland SMU locations: Towson-The Shops at Kenilworth, Baltimore-Harbor East, Annapolis Towne Centre, and Rio Washingtonian.

Both Hazy IPAs will be available on draft and in cans.

Oats + Hazelnut + Coffee + Stuff, our Imperial Oat Milk Stout with Hazelnut and Coffee, is a prodigious pastry stout that’s unabashedly hazelnut forward with a complimentary coffee profile via a duo of cold brew concentrate and dry-beaning. The Nitro can treatment significantly boosts the perception of body while adding a “rounding” texture, softening the angularity of the coffee.

The Imperial Oat Milk Stout will be available in Nitro cans.

Slightly Creative Hazy IPA w/Mango – Upon first impression, Slightly Creative Hazy IPA w/ Mango emanates with an aromatic blast of unabashed mango and yeast-derived stone fruit. On the palate, we experience waves of green mango followed by a pleasing underpinning of pithy tangerine. A unique combination of Ekuanot Cryo, Citra, and Cashmere hops create a hop character which develops a seamless synergy with the over half ton of mango puree added to the fermentation vessel. Full-bodied yet refreshing, Slightly Creative IPA w/Mango is sure to please lovers of tropical-accented IPAs.

Oats & Hazelnut & Coffee & Stuff – The second iteration of our nitrogenized Imperial Oat Milk Stout, Oats & Hazelnut & Coffee & Stuff, bursts at the seams like an intensely flavored, coffee-laced nutella ice cream. Despite being predominantly hazelnut-forward, “Oats” retains a beautiful coffee presence, which effortlessly hones and sharpens the overall flavor profile. We are eternally grateful to the flavor wizards at Ceremony Coffee, who supplied their Destroyer blend via a prodigious combination of cold-brew concentrate and whole bean steeping. Both soft and luxuriously flavored, “Oats” will undoubtedly satiate those who seek intense flavors in their Imperial Stouts.