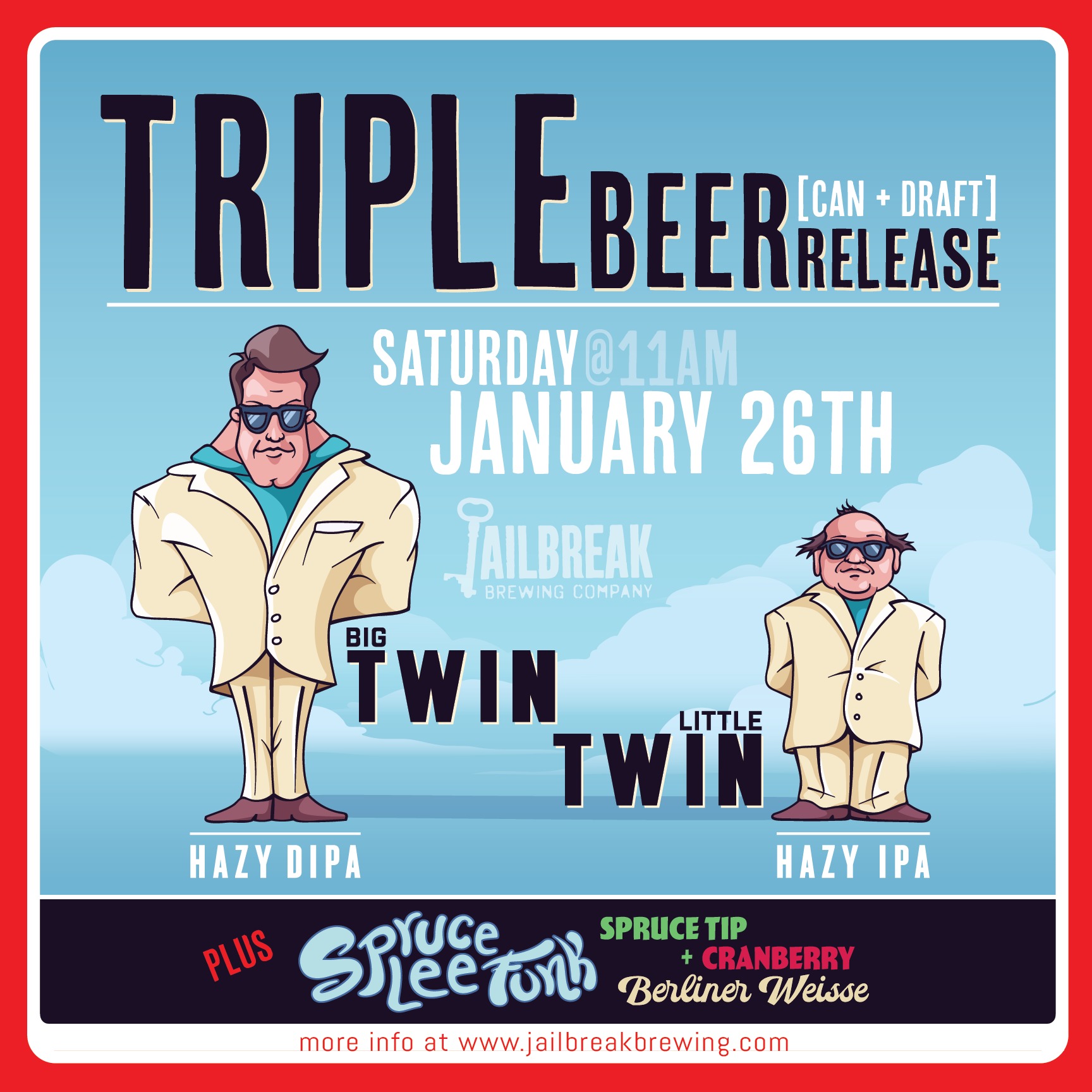 We’re ringing in the New Year right with a Triple 16 oz. Can + Draft Release on Saturday, January 26th!

We’ll have three shiny new brews for your on-site or off-premise enjoyment—a Hazy IPA, a Hazy DIPA, and a Fruited Sour.

Little Twin, our Hazy IPA, boasts Nelson Sauvin, Simcoe, Citra, and Citra Cyro, producing a tropical, slightly dank flavor profile and soft, pillowy mouthful due to the heavy use of oats and wheat in the mash.

Big Twin, our Hazy DIPA, prominently features Strata hops with Citra Cryo in support. The flavor profile is tropical and heavily citric with a semi-dry finish.

Taproom opens at 11 a.m. And of course, we couldn’t release beers named after the ’90s buddy comedy without showing it, so you can catch Danny DeVito and Arnold Schwarzenegger in Twins on the big screen at 7 p.m.

Spruce Lee: We simply cannot stop experimenting with our base Berliner weisse, Funk Sway. For the winter seasonal variant, we have dosed Funk Sway with cranberry puree and “dry hopped” the resultant mix with blue spruce tips, which lends immense, sweetened, pine-tinged citrus to not only boost aromatics, but to help balance underlying lactic acidity. Spruce Lee is as refreshing as winter gets!

Little Twin: When we can get a hold of Nelson Sauvin hops, we at Jailbreak undoubtedly put them to good use. We also love brewing with oats and English ale strains, and Little Twin is the embodiment and marriage of those two loves. By carefully blending Nelson Sauvin, Simcoe cryo, and Citra cryo, we develop a simultaneously citric, herbaceous, dank hop profile buoyed by 30% flaked oats, ultimately coalescing in a velvety smooth texture and a beer with prodigious hop flavor.