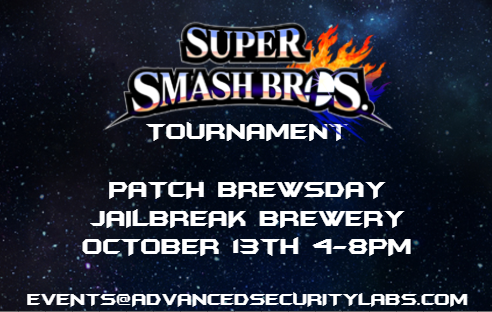 This will be a Smash Melee tournament, with a modified Melee rule-set –

General Rules
-Game Settings: 4 Stocks, 8 Minute Time Limit
-4-player singles double-elimination. Custom brackets will be used to keep players moving forward and avoiding strange match-ups between unseeded players. Essentially 4 players go in, 1 comes out, the remaining 3 continue to play until they have lost two games.
-Items are disabled.
-Stalling with moves such as Jigglypuff’s Rising Pound or Peach’s Wall Bomber is banned
-Glitches such as Ice Climbers’s Freeze Glitch and Mewtwo’s Soul Stunner are banned.
-Pause option is disabled in the game menu. If left on, accidental pausing mid match forfeits a stock.
-You may not choose any stage you have won on during a set, unless agreed by both players.
-A tie is determined by most stocks, and then if still tied, by percentage. If percentage is tied, the match is fully replayed.
-Playing as Master Hand is banned

Just by playing the game you will get two tickets! one to get some food (Pizza) and the other to get a beverage of your choosing. Since this is a brewery, you may be required to provide ID depending on your beverage of choice.

We also have a lot of other things going on, you can learn how to lock pick, play a game of shuffleboard, or battle in bughouse. Enjoy a slice of pizza and sample the newest flavor on tap.

There will be one main game going on the large projector, 4 players per game in a double elimination mode. This is meant to be a FUN event, the location is held at a brewery but under-21 are allowed inside the facility. Registration is encouraged.

Prizes!!! Yes there are prizes! top 4 get to pick from our Treasure Chest (Seen below) to contain a variety of hardware hacking things like Pineapples, Raspberry Pi’s, High Powered Lasers (Will not be liable for any misuse), and more!

REGISTRATION
The venue and registration will be open at 4pm a last call 10 minutes before the start of events. If you will be late and want to be in the bracket, please let us know via email at events@advancedsecuritylabs.com, if you have not given us a heads up and arrive late, you will not be added to the bracket, no exceptions.